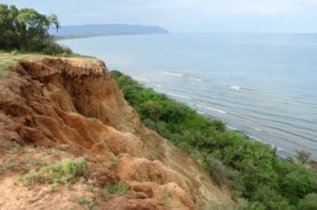 Lake Albert was so named in 1864 by European explorers Samuel Baker and Sass Flora when they "discovered it" and named it in honour Queen Victoria's consort Prince Albert who had died three years previously. It was briefly renamed as Lake Mobutu Sese Seko after by President Mobutu Sese Seko Kuku Ngbendu Wa Za Banga of the Congo (President 24 November 1965 – 16 May 1997) before reverting to its widely known name and is Africa's seventh largest lake measuring some 100 miles long and 19 miles wide with a maximum depth of 168 feet.

Lake Albert is located between the Uganda and Democratic Republic of Congo in Western Uganda and is the most northern of the lakes in the in the Albertine Rift which straddles parts of Uganda, the Democratic Republic of the Congo (DRC), Rwanda, Burundi and Tanzania. Lake Albert is sourced by water from both the Semliki River from its south and the Victoria Nile at its more northern end. To its north the water flows into the Albert Nile, which becomes the Bahr-el-Jebel as it enters South Sudan. (It is believed that between 14500 and 1200 years ago during the last glacial period, the inflow from the Victoria Nile was blocked leading to a significant drop in its water level.) 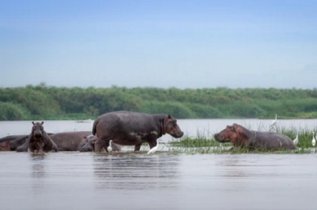 Although a large lake, there are no major towns on its shores on the lake's Ugandan side, however a relatively small population live in nearby villages with Buliisa being the largest town at the north end of Lake Albert with a population of some 30,000. If you have further information about Lake Albert whether it be reviews, places of interest or accommodation contact us using our contact form. Now check out the main tourist attractions in the park in the video below.