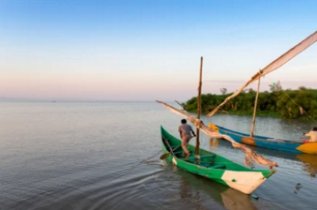 When most think of Africa, they conjure up images of dry dusty plains wand hungry children, but Uganda doesn't exactly suffer from a lack of rainfall and is awash with lakes some of which were formed when running lava from active volcanoes back in time blocked the courses of rivers whilst others, according to traditional Ugandan beliefs, were created by the gods in retaliation for supposed misdemeanours.Some, like Lake Albert, are part of chain of lakes in the Albertine Rift (the western branch of the East African Rift) that were created as a result of on-going tectonic movement that is gradually splitting the Somali Plate away from the rest of the African continent which some scientists have concluded will eventually form a new smaller African continent split from mainland Africa.

The lakes in Uganda provide not only tourist attractions but also provide a living for many of those in Uganda who live on their shores for fishing and other pursuits. Most have boat trips which can be undertaken without great expense and the best have island resorts on them where you can feast on a better than (probably) expected meal!