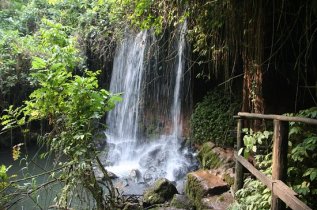 The Amabere Caves, also known as the Nyakasura Caves given their location at Nyakasura Falls, are located some five miles from Fort Portal on the Bundibugyo Road. Not really caves, more a large overhang, the name Amabere Ga Nyina Mwiru translates as "Breasts of Nyinamwiru" with Nyinamwiru being the daughter of a local usurper king who reportedly had her breasts cut off to make her less attractive to men. This rather drastic plan failed and the King, Bukuku of Tooro, then hid her in the cave. However with her allure still strong, she became pregnant to the Batembuzi King Isaza and later gave birth to their son, Ndahura.

Unable to breastfeed the infant herself, she used what looked like milk dripping from the stalactites, which appeared milky because of its calcium content. Ndahura went onto fulfil a prophecy that he would become king and take over Bukuku's throne, a throne that was rightfully Isaza's. Ndahura went on to form one of the great empires of the Great Lakes area of Africa. Or so legend has it! To be honest the caves are probably worth a visit only as part of an extended walk in the area which would also take in the waterfall at Amabere as well as the three local crater lakes. While there, you can stand behind the waterfall which is a great experience and even swim in the small pool itself though it's icy cold and you may end up surrounded by colobus monkeys!

Given recent publicity the entrance fees to the "cave" have recently risen sharply and non-locals also pay a premium. It's still cheap though and the fee includes the services of a guide who will escort you through the often wet and slippery path that winds its way to the waterfall and caves. Er, all of three minutes walk, but the guide will enthuse you with ancient folklore to make the cost worthwhile! There is also a nearby campsite.