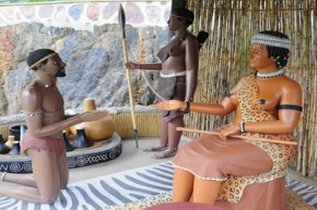 There aren't many museums in Uganda however here we present an online guide to the best of them. Part of the reason for their being few museums is that the tourist industry in Uganda is under developed reflecting a poor infrastructure such as roads etc but mainly because there is little interest amonhst Ugandans in museums or knowing about the past. As one resident of Western Uganda recently stated about a local historical attraction "For us, we do not know anything; we do not even need to know much". This is a shame and some museums that have been developed in Uganda often by elders who are anxious to preserve their rich cultural heritage soon find themselves in financial difficulties and are forced to close. With no government grants and mainly limited to school trips, there aren't sufficient numbers of visitors to keep them going. So while you are in Uganda take time out to visit the museums below and, although not an actual museum, the Batwa Experience is also well worth a visit. It's like stepping back in time!

Uganda has never been an historical country rather it was created as a protectorate by the British comprising lands that weren't Kenya, Sudan, the Congo and Tanzania. A number of kingdoms were then grouped into a country called Uganda and named after the largest kingdom of Buganda. In reality the old kingdoms had a rich, but largely unwritten history and many rose and fell merging into larger kingdoms or disintegrating into smaller ones later being absorbed as dynasties married and had children. Many of these old kingdoms and empires are explored in the museums below in Uganda.