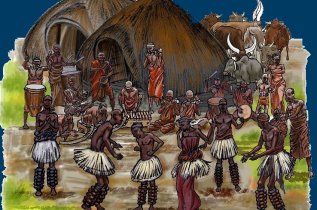 Ntungamo forms a sub-district of the Ankole sub-region of Uganda along with Buhweju District, Bushenyi District, Ibanda District, Isingiro District, Kiruhura District, Mbarara District, Mitooma District, Rubirizi District and Sheema District. Together they cover the area that constituted the Ankole Kingdom that was abolished along with the other traditional kingdoms that made up Uganda when colonised by the British, by then President Milton Obote (term of office 15 April 1966 – 25 January 1971; 17 December 1980 – 27 July 1985) in 1967. The earliest legends tell that the first occupant of Ankole was Ruhanga (meaning the creator), who it was believed came, together with his three sons Kairu, Kahima and Kakama, from heaven to rule on earth.

To determine his rightful heir, Ruhanga set a task for his three sons with the youngest son Kakama winning the competition followed by his elder brother Kahima and lastly the eldest brother, Kairu. With that Ruhanga returned to heaven decreeing that his youngest son Kakama, who then assumed the name Ruhanga, should rule and also rule over his elder brothers. Whilst just a myth, it should be noted that much of the area's early history was based on such legends and myth later supplemented by archaeological evidence as there was no real written record of local history in East Africa until the European's arrived in the late 19th century. 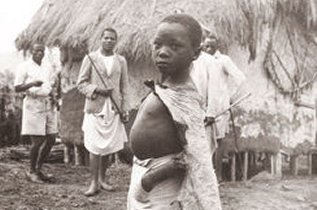 The actual history of the Ankole Kingdom ~ earlier and more accurately known known as the Nkore Kingdom ~ can be traced back to around 1447 BCE under the rule of Omugabe (monarch) Ruhinda Nyabugaro who was a son of Ndahura, a Kitara king of the Empire of Kitara (above, top) that straddled the great lakes area of Africa until it was broken up and superseded by smaller kingdoms during the 16th century. The name Ankole was later given by colonising muzungus (white Europeans in the 19th century) in error as a corruption of Nkole to the composite Nkore kingdom together the former independent Kingdoms of Igara, Sheema, Buhweju and parts of Mpororo in which today's Ntungamo was located, when it was incorporated into modern Uganda in 1901 by the signing of the Ankole Agreement leaving the Omugabe as ceremonial head but within a British colonial framework. 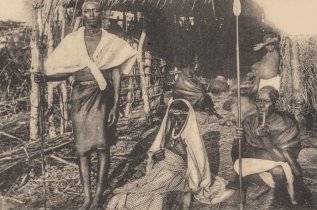 It should also be noted that the royal Omugabe's were of the Bahinda clan, a clan considered exclusively Bahima (above). Despite the historical tensions, it should be noted that the Bahima and Bairu were very much co-dependent with the Bairu getting their milk, meat, hides and other cattle products from the Bahima, while the Bahima needed agricultural products from the Bairu (as well as local beer) although it remained an unequal relationship with many Bairu treated as little more than slaves and marriage between the two forbidden. These tensions remain an underlying source of concern even today as neighbouring Rwanda saw its caste system erupt into a bloody massacre in 1994.

It is interesting to note that the legend of Ruhanga embodies this caste mentality with the god like supernatural entity of Ruhanga ordaining that his youngest son should be served by others (including his elder sons) to indoctrinate this acceptance of superiority of one above another. It has been suggested that the Ruhanga legend was created by the Bahima for that very purpose; ie to get the Bairu to accept their "lower status" in life. Although part of the Ankole Kingdom from the early twentieth century, the history of Ntungamo is more closely associated with that of the Mpororo kingdom, which can be traced back to 1650 however was short-lived disappearing a hundred years later. It was founded by Kahaya a Mututsi a relative of the the recently established Nyiginya kingdom of modern day Rwanda and covered Kigezi District (modern day Kabale District, Kanungu District, Kisoro District and Rukungiri District in south-west Uganda) later western Ankole and parts of north modern day Rwanda. As such inhabitants of south-west Uganda and Rwanda today have much in common from a shared language to ancestry.