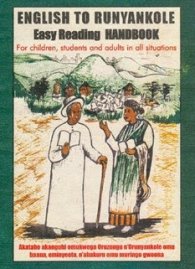 Runyankole is a Bantu language spoken by around two and a half million people in south-west Uganda, particularly around the old Nkore and Mporora kingdoms that were subsumed into the Protectorate of Uganda under the Ankole Agreement of 1901. The language is also known as Nyankore, Nyankole, Nkole, Orunyankore, Orunyankole and Runyankore. Whilst a very old language, the written word was not commonplace in its location until the arrival of the Europeans in the late 19th century with many of the guides and dictionaries being produced in the aftermath of the Second World War such as Charles Taylor's "A Simplified Runyankore-Rukiga-English and English-Runyankore-Rukiga Dictionary" of 1955. Some of the guides give testament to their age by teaching expressions such as "The smith forges spears" and "How fine the cows are" !

When attempting to learn Runyankole, it is important to remember the language should be seen within its context. For example in the West there is a twenty four hour clock, but in the Runyankole language area the clock starts at 6 am (marking daylight) so noon would be 6 o'clock and evening similarly starts at 6pm, so 9pm would be 3 o'clock. To compound these localised influences, Runyankole is generally spoken very quickly, the letters "r" and "l" are interchangeable, r's are rolled, there are many "ch" sounds (written as 'ki' and 'ky') and there are often half a dozen ways of saying the same thing! As such, any attempt to learn Runyankole is fraught with difficulties, and in all likelihood, you will pick up the essentials such as "My name is" (Eizina ryangye nyine); "Yes" (Eego); "No" (Ngaaha) and "Thank you" (Webare) but becoming fluent in conversational Runyankole may take some time! To learn more about how to learn the Runyankole language download the PDF below or download the app here.

These pages are here to help with the basics of Runyankole teaching you common expressions and other words and phrases in everyday use. Be mindful that whilst most speak Runyankole in the south-west of Uganda, most also speak passable English so deployment of the two languages will hold you in good stead, and, as ever, as a visitor amongst such warm and friendly people, even a smattering of the use of Runyankole will impress! Below we present some basic Runyankole language essentials that will assist in day to day interactions. Even if you only learnt these words and expressions your stay in the Runyankole speaking area will be much enhanced. Turebane bwanyima!