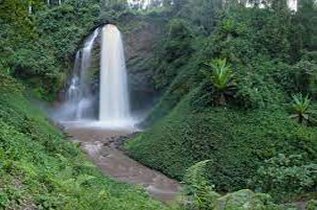 The spectacular falls at Kisiizi find their source in the lakes in the south of Uganda on the Kyabamba River, before travelling through fertile valleys then falling some sixty feet at Kisiizi causing a spray that captures the hot Ugandan sun creating beautiful rainbows that cascade like fire over rocky pools. The falls can be found a short walk from the village of Kisiizi, perhaps best known for its hospital and hydroelectric dam project that was completed in 2008 and powers the hospital and other local services. In fact, the dam provides the hospital with the most reliable source of electricity in the whole of Uganda! Kisiizi can be found in the Kigezi highlands and is a poor area with no real industry with most of its inhabitants being subsistence farmers. Whilst the Kisiizi Falls have great beauty and are well worth a visit if staying in the area, they are the scene of a dark despair that took place over many years. The area is home to the Bakiga ("people of the mountains"), who traversed modern day northern Rwanda and southern Uganda, with some claiming they are part of the Hutu people of Rwanda, though the Bakiga maintain they are a separate people.

The Bakiga were known for their independence and dislike of formal structures and organisations preferring to live without any formal authority. As such, they reacted badly to the coming of the European colonists, who in turn found it hard to deal with the locals as they had no central point of contact nor jurisdiction to impose their authority without military deployment. This resulted in anti-colonial rebellions such as the one in 1911 led by Muhumuza, one of the wives of the former Rwandan King Kigeri IV Rwabugiri who had died in 1885. This anti-colonialist stance was reflected in the Bakiga's response to the introduction of Christianity; it was rejected wholesale for decades as a colonial plot to turn them into "idiots." Instead they worshipped the creator "Ruhanga". 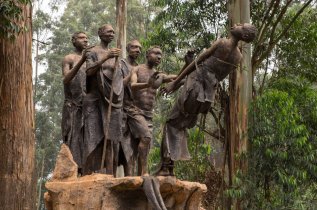 During this period before Christianity took hold, there was a Bakiga tradition of throwing any Bakiga girl who had become pregnant out of wedlock to her death from the top of Kisiizi falls (monument above) as an "act of cleansing" (although the boys that got the girls pregnant in the first place went, as seemingly ever, unscathed). It is understood that some 1000 girls met their death in this way, although the practise had stopped in 1958 not least because one of the final girls who was thrown to her death managed to grab hold of her brother and take him to his death as well. (Some claim the figure is higher at 100,000 although based on available population data that would suggest that many of the girls were thrown over the falls two or three times each.) 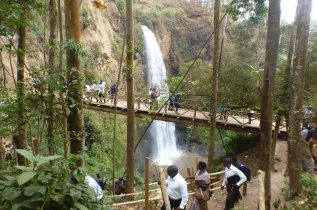 Today the Kisiizi Falls are a popular tourist attraction, although somewhat off the beaten path as Kisiizi itself is only connected to the major road way via a dirt track ~ but that's part of the beauty of Uganda, wild, natural, uncommercialised and unspoilt. Those visiting can also take in the spectacular wildlife, not least its magnificent array of birds that can be seen around the falls including the Arrow-marked Babbler, the Ross Turaco, Sacred Ibis and Double-Toothed Barbet.