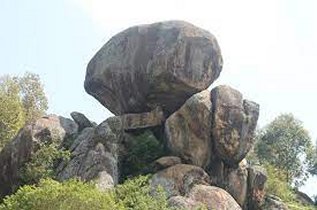 The Karegyeya Rock, known locally as Eibare rya Karegyeya, can be found just over a mile outside of Ntungamo in Karegyeya village on the road to the two street, hilltop town of Rukungiri. The legend of the rock encompasses local traditions of the ancient Bachwezi; demi-gods who took on human appearance but did not die, they simply disappeared into the underworld. They were said to be the original, traditional rulers of the empire of Kitara, a probably mythical kingdom that existed in the 14th and 15th centuries and covered parts of modern day Uganda (including Ntungamo), Tanzania, DRC, Kenya, Rwanda and Burundi.

The Bachwezi were in turn believed to be related to the Batembuzi, a dynasty founded by Ruhanga, the creator. The last of the Batembuzi rulers, Isaza, is believed in tradition to have married and had a child with Nyamata, the daughter of the king of the underworld, Nyamiyonga. Nyamiyonga was later to seek vengeance on King Isaza for attempting to deceive him over a pact and lured him into the underworld from where he was never to return to world of men.

The Karegyeya Rock is believed to form an entrance to this underworld and that the Bachwezi still reside down there, a legend perpetuated by rumours of fires seen at night emanating from the rocks with ashes and worldly goods scattered around them at day break. In order to keep the locals away and to prevent them from exploring the secrets of Karegyeya Rock further, a further legend of a giant snake that lurks under the rock also exists. A snake so large its belly contains a lake, a lake so large that if the rock was ever destroyed the waters from the lake would break free and devastate the surrounding areas like a dam breaking.