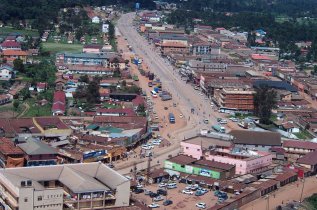 Kabale, with its population of some 500,000, is the chief town in deep western Uganda and whilst some 260 miles from Uganda's capital city of Kampla, Kabale is just 49 miles from the capital city of Kigali in neighbouring Rwanda. Kabale is nothing spectacular and anyone visiting to see the town itself probably won't be overly impressed as it's adorned with road works, dust, heavy rains and the typical shops that litter Ugandan town and villages. Where Kabale comes into its own however, is as a gateway to Western Uganda. Within a short distance is the beautiful Lake Bunyonyi, Bwindi Impenetrable National Forest, and of course Rwanda whose Virunga Mountains can be seen from the town.

Kabale has most things you would associate with a larger town from an internet cafe, to hotels of varying quality, to car rental, banks such as Barclays, a museum, cafes all surrounded by rolling hills with Kabale itself perched some 6500 feet above sea level ~ compare that with the UK's Ben Nevis which comes in at just 4,409 ft! Its height makes for somewhat chilly nights with daytime temperatures averaging just 18 degrees which are much lower than elsewhere in Uganda.

Kabale has its own university founded as a private community led university in 2001 however as from the summer of 2015 it is now run by the government in line with many other universities in Uganda. In this Kabale guide, we showcase the best of things to do when out and about in Kabale, from its hidden cave high up a mountain, to playing golf, visits to Lake Bunyonyi and trips slightly further afield such as the spectacular waterfall as neighbouring Kisiizi.

If you know of other tourist attractions in Kabale to add to this travel guide please get in touch and let us know using our contact form.