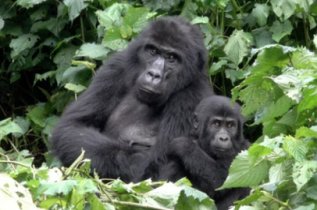 Having spent time with many who have been gorilla trekking in Bwindi Impenetrable National Park, all have described it as "the experience of a lifetime", though as harsh on their pockets as the trek through the forest in the search for the gorillas was on their legs! Home to 340 mountain gorillas (half the world's population of this endangered species), the park itself is some 128 sq miles of jungle forests situated on the Albertine Rift along the border with the Democratic Republic of Congo. Although accessible all year round (so not exactly "impenetrable"!) tourists are recommended to avoid the rainy seasons as conditions there can become very difficult. There are many different organisations that run gorilla trekking safaris in Uganda and its easy to search for them online, one of which is below. Expect to pay around £700 per person and that includes a rather expensive permit (they are actually cheaper to buy in Uganda rather than in neighbouring Rwanda.)

Gorilla trekking isn't something you can just turn up on the day and do. We strongly recommend you book with your safari guide at least three months in advance to avoid disappointment. If going with a family, the minimum age is 15yrs old and the authorities enforce this strictly.