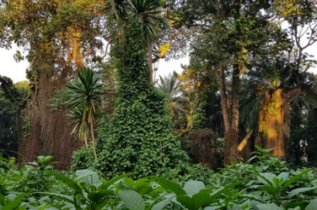 The National Botanical Gardens of Uganda (better known locally as Entebbe Botanic Gardens) were established on the shores of Lake Victoria in 1898. The gardens are perfect for an afternoon out as you stroll through its four zones including a rainforest zone where you'll see much wildlife including the black and white colobus and tree squirrels. The Entebbe Botanic Gardens are also home to around 115 species of bird so an ideal opportunity for bird watchers to capture some amazing photographs and, if you are very lucky, you will spot the Verreaux's eagle owl; Africa's largest owl. Although numbers have now declined following Uganda's years of inner political turmoil, the gardens were also home at one point to around 2,500 species of plants of tropical, sub-tropical and warm temperature zones.

For the less agile a vehicle tour is available as are guides who will explain to you the various species of plant, birds and other animals, however for most, the greatest pleasure is such strolling through the gardens at your own pace, not only enjoying the flora and fauna of Uganda but imported plants from around the world. (If looking for a guide be aware that even by Ugandan standards they are particularly "needy" so you would be best advised to negotiate a price beforehand as if left it until the end of your tour may cause friction later.) One of Entebbe Botanic Gardens claims to fame is that it was used as a backdrop to many of the Tarzan movies filmed in the 1940s!